Injuries due to rubber projectiles 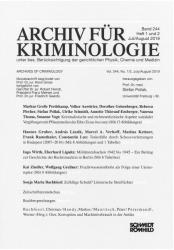 Three persons were injured by firing six shots from a handgun with rubber projectiles, cal. 9 mm PA, from a distance of approx. 1-4 m. The injuries were caused by the firing of the handgun. After penetrating the fabric layer of a shirt, six almost identical, characteristic injuries of oval shape and up to 18 mm in diameter occurred, which mainly penetrated only the skin layers. In one case the projectile reached the flank muscles. Internal organs were not injured. The literature research showed that this type of weapon and ammunition is particularly common in Russia, where it is referred to as a “traumatic”, “kinetic” or “non-lethal” weapon system. Accordingly, there is an extensive literature there, according to which, however, quite fatal cases were observed when thin parts of the skullcap were penetrated by gum-piprojectiles. In the present case, damage to the middle thoracic spine in one of the victims and injury to the spleen in the second victim could not have been ruled out, assuming a regionally smaller muscle thickness.

Weapon systems for firing rubber projectiles are classified in the laws of other countries below the sharp weapons and thus attain special significance in parts of the criminal scene because of their effect going beyond the SRS weapons. In Germany, the legislator does not make a distinction between live and so-called non-lethal weapons and ammunition. Nevertheless, the present case, as well as individual reports by other authors, shows that an “import” of such types of weapons and ammunition, their use and a resulting injury pattern must be expected.